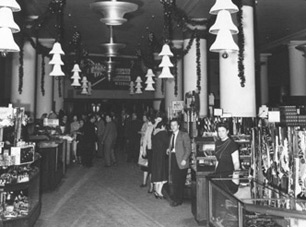 Q: You’ve said that this novel came to you from remembering, as a child, overhearing a woman talk about her young daughter who had moved to Brooklyn from Enniscorthy. What about that memory made you want to expand this story?

A: I put what I heard into a short story which I wrote in 2000, but five or six years later, I think three things had changed which made it possible (or even made it an imperative) for me to work on the story for longer. The first was that I began to spend time in the United States and I began to feel (albeit from a privileged position) the funny mixtures of loneliness and need and occasional happiness that emigrants feel. Also, outsiders—especially Poles, Nigerians, Chinese—[were coming] to Ireland and I used to watch them and think about them. And finally, I taught a few courses, which included Jane Austen and I began to think about a novel, which used her method of examining a single psychology, using an introspective, sensitive heroine, some comic characters and some romance.

Q: Eilis is for the most part very reticent, and lets others determine the course of her life. Why did a character like that appeal to you when writing about someone moving from a small Irish town to Brooklyn?

A: Because there would be a dramatic gap between her inner life and how she behaves which the reader would fill. In other words, she thinks and notices and reflects with considerable force, but then she doesn’t act on her intelligence. I thought this would be interesting for that reason—the gap in her personality.

Q: Your work often deals with death and mourning, from The Blackwater Lightship to Brooklyn. How is portraying that process of mourning significant in telling these stories?

A: Yes, it comes up in one way or another in all the books. It is a strange process because this does not happen deliberately, but at the same time I write with as much control as I can manage. So I think it would be fair to say that the issue is in my DNA.

Q: Perhaps you can comment on a couple of scenes in the book that root Eilis in mid-20th century history. The first is her encounter with the bookstore owner who mentions the Holocaust, and Eilis is taken aback, confused. What were your intentions with this scene?

A: I read this scene in Wexford where I am from and Eilis is from. A woman in the audience, a woman in her late seventies, said that she worked as a nurse in New York in the 1950s and the scene in my book had happened almost precisely to her when she found that a colleague, a doctor, had been in a German concentration camp. She was shocked, not because she had never heard of the Holocaust, but because she had never expected to meet anyone who had been a victim of it or a survivor of it. It had seemed so far away from rural Ireland. My intentions were to show how remote Eilis’s childhood and young adulthood were from what happened in Europe, and that now, in her 20s, she was meeting someone who had survived. Suddenly, her time in Brooklyn was making her confront the real world.

Q: The other scene is when Eilis is asked to work at the counter at the department store selling stockings to African American women. How important was it to include this in the novel?

A: Eilis is as innocent as many Irish people of her generation. Thus she simply doesn’t know about race and racial issues. The scene is brief, it is part of her day, her work; she has no strong views on it one way or the other. She is an outsider.

Q: Do you think about how you may have written about this same sort of character today? How would Eilis’s story contrast with the story of a young woman moving from Enniscorthy to America in the 21st century?

A: Oh she would be much more clued in, have watched it all on TV and known a lot about America. She might still find it strange, but she would not be innocent.