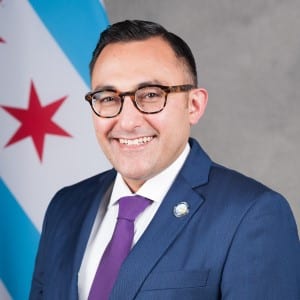 Chicago Public Library Commissioner Chris Brown is passionate about redefining what public libraries can bring to the communities they serve. This mission is particularly vital for CPL—its 81 locations make it one of the world’s largest library systems.

Brown came to CPL in 2021 after more than a decade serving in Californian districts. Throughout his career, he has prioritized equity and the democratization of access to information, including nontraditional patrons and resources beyond traditional library materials. He is currently spearheading collaboration with neighborhood safety groups, City departments, and outside partners in order to establish safe spaces for youth. He has also initiated CPL’s first organized analysis of its processes with the goal of improving equity for patrons. This work began with the opening of CPL’s first regional library on Chicago’s West Side since the 1970s.