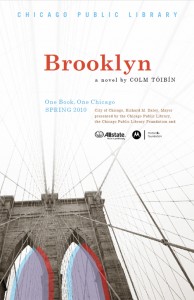 Colm Tóibín’s novel Brooklyn was published one year before it was selected as the 18th selection for One Book, One Chicago; it was lauded as the finest work yet from this highly respected international author and received the prestigious Costa Fiction Award. The story of a young girl from Ireland struggling to find herself in 1950s Brooklyn, it is a story about immigration, family, love and adjusting to change.

Colm Tóibín joined us in Chicago for a conversation on stage with Chicago Public Library Commissioner Mary Dempsey. He also met with a group of students from area high schools who had been working on projects related to the novel in the Library’s YOUmedia space. Through an online forum created by YOUmedia, Chicago schools communicated with students from two schools in Ireland who were also reading the book, and “met” with the Irish students for a virtual discussion. The Library worked closely with the Chicago Sister Cities Galway Committee and the Irish American Heritage Center on further programming, including multiple performances of readings from the novel set to music, put together by local actor Michael Patrick Thornton. A discussion blog was started, and publicized through the Cúirt Festival of the Galway Arts Center in Ireland, with essays by guest bloggers serving as the catalyst for discussion between readers on both sides of the Atlantic.