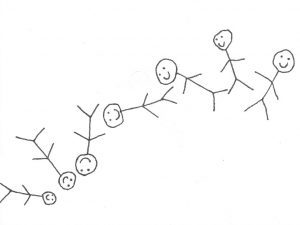 Have you ever wanted to turn your back on everything and take off in such absurd directions that your actions become dangerous and offensive?

I guess I'm sorry, then. Everyone keeps telling me to stop talking like that, but there are just so many ways to ruin your life in fiction and reality, I'm amazed more people don't do it.

Let's say you're locked in a closet by a bunch of violent, loudmouth revolutionaries. History says you will join them. American Heiress tries to explain how Patricia Hearst, granddaughter of newspaper magnate William Randolph Hearst, hooked up with the radical Symbionese Liberation Army after they stole her away to make a name for themselves.

And think about what happens when, in the middle of a political drama, the main character snaps and runs off into the middle of a storm with a jester. You get King Lear, that's what. There are plenty of good versions, but if you want to see a fairly young Orson Welles wear old man makeup and chew up all the scenery in a severely edited 1950s television play, the Omnibus Production is for you. You can also watch a Japanese warlord tear up his world in Ran, Kurosawa's famed adaptation.

Or maybe you want to join the circus. Maybe you're born tiny, and your parents decide to stretch out your limbs in a horrible contraption that makes you look like a wolf. Of course you run off with the circus, and you dress up in hair to become a wolf girl, and then when your boss tries to seduce you, that's when things get weird. If you want a good idea of what it's like to give in to complete otherness, then Marisa Silver's novel Little Nothing is for you.

It's fun to read about people who upend their lives. As an added bonus, it keeps you from doing it yourself.