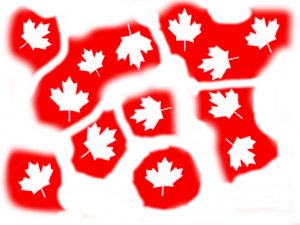 I'm not sure why, but a few weeks back, I got the Canadian national anthem stuck in my head, and it got me thinking. I never thought about it before, but Canada's a country. It's not just a punchline to a joke about friendly neighbors or a place where some celebrities come from. It's got history and literature and stuff. The thought blew my mind.

For instance, did you know that Canada has poetry? It never even dawned on me until I stumbled across an audiobook called, well, Canadian Poetry. I'm not much of a poet myself, so I can't comment on the quality, but I love the fact that they didn't use a standard, highfalutin voice actor. Instead, it's read by some dude whose down-to-earth voice makes me want to track him down just to hang out.

They even have their own history. There are a bunch of books on Canadian history, but why not go with a classic? Francis Parkman's France and England in North America contains a good chunk of old, mysterious Canadian lore. As a warning, this history was written in the nineteenth century and is not as fair as it could be to indigenous peoples, but at this point, any Canadian history is a marvel to me.

And then, out of the heavens, I found out that one of my favorite literary critics (yeah, I've lost all hope) wrote a book called O Canada. It seems that in the 1960s Edmund Wilson realized, just like I did, that Canadians are people too, and he wrote a whole book on his impressions of Canada and Canadian literature. I might be the last person alive who could enjoy this book, but I'm recommending it anyway.

Wish me luck. I don't know where the maddening depths of Canada will lead me, and I'm afraid and hopeful and enthralled. I need all the luck I can get.