Plan Your Visit to HWLC has information about what to see and do while you're here. 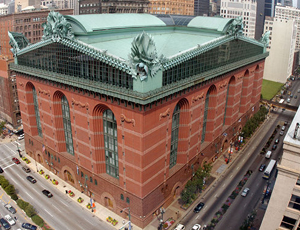 More than an example of late 20th century American architecture, the ornamentation, iconography and allegorical figures that embellish Harold Washington Library Center are an homage to Chicago’s history and culture. Our video highlights the conception and construction of some of the building’s most popular features. The Special Collections & Preservation Division at Harold Washington Library Center holds the documentation of the work seen in this video.

Who Are Those Owls? 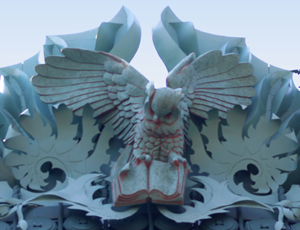 Five massive owls look down from the top of Harold Washington Library Center.

Four 12-foot-high barn owls with 3-foot-high heads grace the corners of the building's roof. They're augmented by 75-foot-wide and 40-foot-high swirls of leaves and seed pods. Those ornaments represent growth and wisdom. Seed pods metamorphose into owls, the long-accepted symbol of knowledge. The owls are depicted in an aggressive stance, leaning forward with 8-foot-high wings. One foot clutches loose papers, while the other, with talons raised, is ready to strike.

The great horned owl is atop the main entrance of the building, on State Street. At 20 feet high with a 20-foot wingspan, it weighs three tons. Clutching an open book, this owl stands with wings spread, ready to take flight. An avid reader, the owl always returns his books.