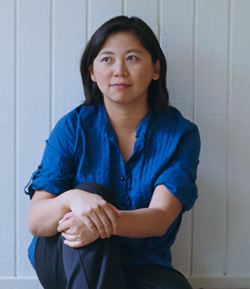 Yiyun Li was born in 1972 in Beijing. Along with her parents and one sister, she lived in an apartment complex built as housing for employees of the Department of Nuclear Industry, where her father worked as a physicist. In 1991 Li reported to Xinyang to complete one year of service in the Chinese army before going to college. After receiving her bachelor of science from Peking University, in 1996 she moved to the United States to study immunology at the University of Iowa. However, after taking a writing course as a way to improve her English, she found herself writing fiction. She decided to change the focus of her studies, entering the famed Iowa Writers’ Workshop after receiving her master of science in 2000. She earned her master of fine arts in 2005 with a focus on fiction and creative nonfiction.

Soon after Li’s short stories began appearing in major U.S. magazines, publishers at Random House sought her out for a collection. A Thousand Years of Good Prayers was published in 2005, with stories focusing on Chinese or Chinese American characters and exploring themes of immigration. It was widely praised, with the reviewer Fatema Ahmed in the New York Times Book Review noting, “Li does more than simply provide a human face for a set of statistics. Her compassion for her own creations persuades us that they are worth caring for.” The collection received the Guardian First Book Award, the Frank O’Connor International Short Story Award, the PEN/Hemingway Award and the California Book Award for first fiction. It was also shortlisted for the Kiriyama Prize and the Orange Prize for New Writers. The title story was adapted into a film directed by Wayne Wang in 2007. Wang also made a film adaptation of the story “The Princess of Nebraska” in the same year.

In spring 2007, Li was named by Granta magazine as one of the best young American writers alongside Kevin Brockmeier, Maile Meloy, Gary Schteyngart, Karen Russell and others.

She followed her debut collection with a novel, The Vagrants, in 2009. Set in a Chinese provincial town named Muddy River, it weaves together the lives of various characters affected in diverse ways by a brutal public execution. The novel received the California Book Award for fiction.

In 2010, with Gold Boy, Emerald Girl, Li returned to short stories with a collection set entirely in China. She set out, she has said, to write personal stories not centered on politics or history even if they are affected by them. Of the book, Alice Fisher wrote in the Guardian, “The dramas are all small but in Li’s hands they become profound. Her short stories have the sparseness and impact of Raymond Carver or Haruki Murakami; simple words forming neat sentences that pack a great emotional punch.”

Li’s stories and essays have been published in Granta, The Paris Review, The New Yorker, Best American Short Stories, O Henry Prize Stories, Zoetrope: All-Story, Ploughshares, The Gettysburg Review, Glimmer Train and elsewhere. She has received the Plimpton Prize from The Paris Review; a Pushcart Prize; a nomination for The Story Prize; fellowships and awards from the Lannan Foundation and the Whiting Foundation; and in 2010 she received a MacArthur Foundation Fellowship. Also in 2010, she was named by The New Yorker as one of the top 20 writers under 40. She is a contributing editor to the Brooklyn-based literary magazine A Public Space, and in 2010 she translated the letters of Chinese writer Shen Congwen for that magazine.

Li lives in Oakland, Calif., with her husband and their two sons. She taught at Mills College from 2005 to 2008; and since 2008 she has been on the faculty of the Department of English at the University of California, Davis.