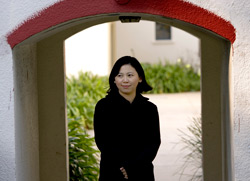 Q: You have said that you create your characters out of a need to imagine other people’s stories in full, and your characters themselves are always such keen observers. Was observation and imagination a large part of your youth?

A: I grew up in a different era when there were many strict rules over how a young person should behave; but to look, to see, to imagine, one could defy those rules to some extent. Though sometimes when you were an observer and forgot you were observing, you could get into trouble. I distinctly remember this woman who used to be the manager of the municipal bathhouse in our neighborhood, who seemed to dislike me with a violence that always took me by surprise. Now I know that it was because, while waiting in line to get a key to a locker or a basket (depending on how her mood was, she would grant you a little more security or less), I was observing her with an intensity that must have unnerved her. But at the time I wasn’t aware that I was observing her, and was always surprised at her anger at me.

Q: In this collection there are many characters that teach or instruct, whether they are a professor, military officer or simply a mentor. However, they seem to do so more out of duty than out of an enthusiasm for learning. Can you discuss this a bit?

A: I wonder if some of my characters feel ambivalent about being in the role of instructor, and whether it reflects my own ambivalence. I think the most willing or most confident mentors among my characters—Professor Shan, for instance, in “Kindness,” or Mrs. Jin from “The Proprietress”—perhaps have done good and done damage; and sometimes kindness from them becomes unkindness. And then there are characters like Teacher Fei in “A Man Like Him,” or Professor Dai in “Gold Boy, Emerald Girl” who probably fight against their roles as much as they fight against their own fates. Their lack of enthusiasm is almost their only way to protest.

Q: These stories provide such insight into Chinese life, particularly in the ’70s and ’80s. But at the same time a lot of Western culture is part of these stories—from D.H. Lawrence to the music of Chopin or “The Last Rose of Summer,” an Irish song adapted from a Thomas Moore poem. Can you tell us a bit about the intersection of Western and Chinese culture in your experience as a younger person in China?

A: Much of the Western influence I experienced when I grew up in China came from books—poetry, novels, philosophy. I grew up reading in the most unsystematic way: I read whatever book I could get hold of. And of course music—both classical and pop music—also came into that world without my being able to understand it. So part of writing this intersection of Western and Chinese culture is to try to understand everything in retrospect: what did it mean when John Denver was the first American singer my generation got to know, and why did “Country Road Take Me Home” matter more to his Chinese audience than to an American audience? Or: what did it mean to read D.H. Lawrence when sex, gender and many related topics were entirely taboos? (Which, in a way, made me a reader not of [my own] generation but of [his].)

Q: In the story “Prison” you write about emigrated Chinese who return to China and, among other things, the story is about that reverse move. What are returns to China like for you? Do you find 21st century China vastly different from the China of your youth?

A: I have only returned to visit, which means that when I am in China, I am between an insider and an outsider—I am a bit of both. I don’t think that what fascinates me has changed much. The country certainly is a different place: facelifts in almost every city, massive economical developments. [But] I always believe that human hearts evolve very slowly. [This] is why we still read Jane Austen and understand her world and her characters without a problem.

Q: Frequently in these stories a character expresses themselves in music, or two or more characters share an intimacy through music that they otherwise wouldn’t. Was this use of music in your work a conscious choice?

A: I wonder! I am not certain if it is a conscious choice, but I am aware that music means a lot to my characters. I am not a very visual writer, and I don’t invest as much in scenes as perhaps many of my contemporaries, but writing to me has a lot to do with music—the mood, the movements, the repetitions, etc.

Q: In contrast to the stories in Gold Boy, Emerald Girl, your more recent story, “The Science of Flight,” published in The New Yorker about a year ago is set in a college town in Wisconsin. You spent time in Iowa, of course. When setting stories in the States, do you return to the Midwest? Your characters transplant to a Midwestern setting particularly well; the way they interact with each other at arm’s length in particular seems very Midwestern.

A: Sometimes readers ask me if I ever will write about America, and I say, of course. But one has to accumulate a certain understanding and memories about a place before one can write it well. I have been interviewed several times by California media, asking about what influence I have drawn from living in California and/or the Bay Area, but I always have to answer that nothing much [has influenced me] yet. I lived in the Midwest for nine years, and now I have lived away for six years, which seems to explain why a Midwestern setting is particularly important for me at this moment. And of course my characters, even if they grew up in China, can be very Midwestern!

Q: You have often said that your stories are in communication with other stories. Please tell us five books that you would say are required reading, particularly for readers who love your work.

A: Oh, dear, I wouldn’t say required reading, but I would consider these authors/books important for my conversations. Any of the story collections by William Trevor (particularly The Hill Bachelors and After Rain); Nights at the Alexandra, [his] novella—I wrote “Kindness” particularly to talk with that book. The Power and the Glory by Graham Greene, which my novel The Vagrants was often conversing with while I was writing it. Elizabeth Bowen’s essays and novels, which I read and reread [in order] to have any kind of conversation about the world or human beings.