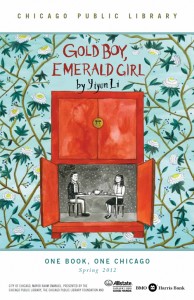 Yiyun Li’s third book, Gold Boy, Emerald Girl, presented an ideal opportunity for Chicagoans to learn more about China and its people, whose daily lives are not much different from our own. Francine Prose wrote of the book, “Yiyun Li’s tenderness toward her characters, her respect for the richness of their lives, and the subtlety and gentle humor with which she portrays them make the experience of reading Gold Boy, Emerald Girl consistently heartening.”

Li’s collection offered rich material for discussions and programming throughout April 2012, including an appearance by the author in conversation with fellow writer Achy Obejas; a lecture by author and scholar Jeffrey Wasserstrom (China in the 21st Century); a week of screenings at the Gene Siskel Film Center of the documentary film Mulberry Child, which shares many themes from Gold Boy, Emerald Girl and features local author Jian Ping; a reading from the book with Silk Road Rising theater; a concert of music inspired by Li’s stories presented with the Chinese Fine Arts Society; a tour of Chinatown with the Chinese Cultural Institute; cross-promotion of lectures and exhibits at the Chinese-American Museum of Chicago; and an open mic night for teens in YOUmedia at the Chicago Public Library.