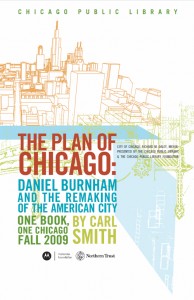 In partnership with the Burnham Plan Centennial, the Chicago Public Library selected historian Carl Smith’s acclaimed history, The Plan of Chicago, as the 17th One Book, One Chicago selection. Our events and discussions were part of a citywide initiative to bring attention to Daniel Burnham and Edward Bennett’s bold vision for our city and region, and drew large and lively crowds. All of Chicago was invited to learn about and discuss our city’s evolution from prairie to industrial hub to the city we know today.

Programming included a kickoff panel with prominent urban planners and policy makers on how to keep Chicago vital in the 21st century; documentary film screenings; a one-man performance of Burnham’s original pitch to the city; a lecture by Carl Smith as well as further lectures on public housing, transportation, the city and the environment; modern architecture and “Chicago visionaries.” Speakers included local historian Dominic Pacyga, fiction writers Bayo Ojikutu, Billy Lombardo and Gina Frangello; and architects Sarah Dunn, Martin Felsen, Patrick H. Grzybek and Doug Farr. Several library branches were also home to an exhibit on the Burnham Plan and community discussions led by experts on how Burnham’s vision translates to today.