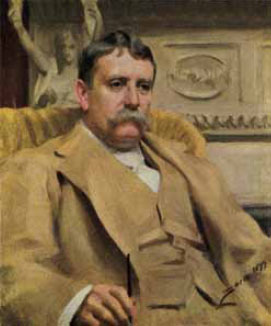 Born in 1846 in upstate New York, Daniel Hudson Burnham moved with his family to Chicago at age 8. As a young man he excelled at athletic and artistic pursuits, though not at academics, and he tried and failed to gain admittance to Harvard and Yale. After these disappointments and a brief time spent prospecting in the West, Burnham returned to Chicago and settled into a career in architecture, forming what would be an integral partnership with John Wellborn Root.

After a period of struggle and hardship, the partners got a break when asked to design a home for stockyards magnate John B. Sherman. The successful completion of the project brought not only more commissions, but also Burnham’s engagement and marriage to Sherman’s daughter, Margaret. Burnham and Root would go on to design other residential, commercial and civic structures, but their most influential works were buildings such as the Montauk, the Rookery and the Monadnock that helped inaugurate the era of the skyscraper in Chicago.

Burnham moved from these momentous achievements to what would be his greatest challenge to date—directing the design and construction of the grounds of the 1893 Columbian Exposition, a grand complex of buildings and waterways that would come to be known as the White City. The challenge was made all the more difficult by the tragic early death of John Root in 1891 from pneumonia. Constructing the White City was a massive undertaking, and Burnham was involved in aspects great and small, from choosing the architects involved to seeking out references for the most reliable grass mowers. Burnham’s central role also made him the main target of criticisms of the White City, most notably those made by the architect Louis Sullivan.

In the years after the fair, critics such as Sullivan would claim that the imposing neoclassicism that dominated the architecture of the White City had caused such a revival of the derivative style that more innovative styles, such as that of the Chicago School, suffered for years to come. At the time, however, there were few complaints, and the public in general was so awed by the majestic White City that Burnham’s reputation was cemented overnight. He was named president of the American Institute of Architecture, received honorary degrees from Harvard and Yale and enjoyed a rich social life in Chicago and beyond.

Another long-term effect of the Columbian Exposition was to create demand for comprehensive, directed urban planning exemplified by the City Beautiful reform movement. Burnham’s first experience in planning a real, permanent city came in 1901 when he was chosen to help create a plan for the area around the Capitol building in Washington, D.C., an assignment that dovetailed perfectly with both his talent for large-scale city planning and his appreciation of neoclassical architecture. Burnham carried these elements forward in directing the design of plans for Cleveland in 1903 and for San Francisco and Manila in 1905. Although these plans were implemented with varying degrees of success (while the Cleveland and Manila plans were largely adopted, the one for San Francisco was derailed by the disastrous earthquake of 1906) the aim of each was to bring order and beauty to urban areas that had grown chaotically during the years of the Industrial Revolution.

Burnham’s growing expertise and influence in the field of urban planning culminated in his massively ambitious plan for his own hometown, the 1909 Plan of Chicago. With co-author Edward Bennett, he spent years amassing statistics and consulting experts in order to create a stunningly ambitious plan for the design of not only the lakefront parks, but for all of Chicago, extending up to 60 miles from the city center. The stated goals of the plan were to make the city both more convenient for business and more enjoyable for the private citizen. Parts of the plan were implemented in the following decades and, though some aspects proved unfeasible to implement, it became the inspiration for urban planning projects throughout the world.

This sweeping and well-received vision would turn out to be the pinnacle of Burnham’s life’s work. After completion of the Plan, he refused numerous requests to design plans for other cities and slowed the pace of his professional life considerably in the coming years, enjoying leisure and travel until the time of his death in Heidelburg, Germany in 1912.