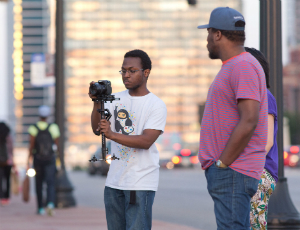 Did you know that CPL has an everyday hero?

Brandon, a current YOUmedia teen, was selected as an HBO/Sesame Street Everyday Heroes Grant recipient. He received a $5,000 grant from HBO to donate to the non-profit of his choice and he chose to donate it to YOUmedia. The mission of the Everyday Heroes Club is to promote kids to grow up smarter, stronger and kinder and Brandon's generous donation will help YOUmedia continue to influence teens in this positive way.

Brandon’s journey began as a freshman in high school, shooting comedy videos with friends. For four years, he's made the hour long trip to YOUmedia several times a week to enhance his video and photography through our workshops. His work has grown enormously. As a cameraman, he has reached a high level of technical knowledge that lets him focus on creative possibilities, which he has been exploring extensively. Brandon's talent is increasingly being recognized. Broken Development, a 7-minute short about gentrification from the perspective of a teenager, won Chicago's Little Mexico Film Festival.

Congratulations Brandon! We couldn't be more proud of your accomplishments!