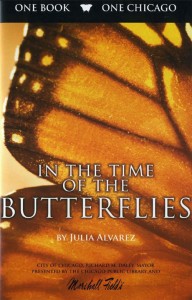 Chosen as the seventh One Book, One Chicago selection, In the Time of the Butterflies tells the story of the Mirabel sisters and their efforts to overthrow the oppressive dictatorship of the Trujillo regime in the Dominican Republic in the 1960s. Ms. Alvarez and her family escaped to the United States before the sisters were eventually killed, but she considers her family’s salvation a direct result of their efforts.

Butterflies gave the Chicago Public Library the opportunity to work directly with Chicago communities in two languages—the One Book, One Chicago resource guide for In the Time of the Butterflies was written in English and in Spanish. Julia Alvarez visited the Library and spoke with Chicago author Ana Castillo during the Library’s free public program about Ms. Alvarez’s book and her writing. Other public programs included book club discussions held in Spanish, film screenings and a panel discussion hosted by DePaul University.