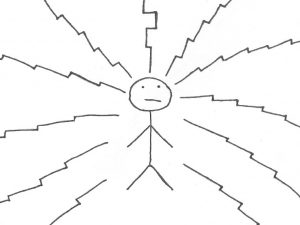 Nothing makes for drama like tales of old, mad gods. We can reread our mythology books as much as we want, but then again, it's much more fun to think up what these gods would do if they were around today.

Bacchus is a graphic novel collection by Eddie Campbell, who worked on From Hell with Alan Moore. It imagines a world where the Greek gods have spent centuries slowly dying and settling scores. Now, all we're left with is a handful of minor deities scrabbling for scraps of leftover power and solace.

American Gods uses the same premise, but expands the pantheon to include mythologies from all over the world, throwing in some new deities just for America, like a god for highways or a god for television. The story follows a man named Shadow, fresh out of prison, as he finds himself forced to navigate a mystical, dangerous world behind the world.

Rather than pit the gods against each other, John Banville's The Infinities pictures the Greek gods living on as supernatural busybodies, interfering in regular everyday life however they please. Narrated by Hermes, it follows a dying genius and his troubled family as the gods can't help but meddle.

With enough books like these, you'll be seeing the gods everywhere, just walking down the street, scheming and struggling to live as long as they can. As a word of caution, if you find yourself in conversation with a talking bull, walk the other way.