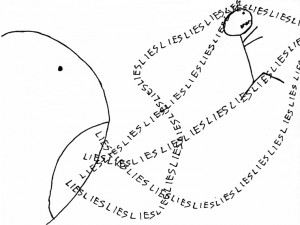 Maybe you're the type who trusts in the basic goodness and honesty of your fellow man, who can calmly walk through life, confident in the truth of what average people and organizations have to say for themselves. As far as I'm concerned, that makes you a sap. They're all lying to you. Books told me so.

You might think it's a smart choice to trust scientists, but if that's the case, you've never been in an experiment. Behind the Shock Machine tells the story of the famous Milgram psychology experiments, where scientists convinced participants that they were shocking people when it was really all a big sham. I'm not sure what's worse, the subjects who were so willing to shock people or the scientists so willing to lie, but either way, I am never setting foot in an experiment if I can help it.

Now that you've stopped trusting science, it won't be too long before you start wondering what the government is hiding from you. Area 51 is a lengthy history of the famously secretive air force base in Nevada. The book appears to be well researched, but at the same time, the author makes the astounding claim that the Roswell incident was caused by neither a weather balloon nor an alien spacecraft, but instead by a Russian experimental aircraft manned by child-size pilots surgically altered by Joseph Mengele. There's no telling how many cover-ups are out there.

And once you believe that America had been hoaxed by tiny, disfigured Russians, it's not long before everything is up for grabs. On the plus side, Jesse Ventura has been kind enough to believe and catalog every sort of conspiracy theory you could imagine. In addition to his hilarious television show, he's also written American Conspiracies, which clues you into the truth about John Wilkes Booth, JFK, Watergate, 9/11, Wall Street and a host of other things you thought you knew.

This is some dangerous stuff. I can feel the heat closing in on me already. If you don't mind, I'm going to grab my tinfoil hat and hide in the basement for awhile.