In 1864, the railroads got together with the local meatpacking interests and chartered a company called the “Union Stock Yard & Transit Company,” more commonly known as the Union Stockyards. To avoid Chicago’s antipollution regulations, the company bought a half square mile of land in the Town of Lake just outside the city limits at 39th and Halsted. All nine railroads ran track to the new location, stock pens were built and the yards opened in 1865. The location is shown as "U" on this map from the 1905 Report of the Department of Health. 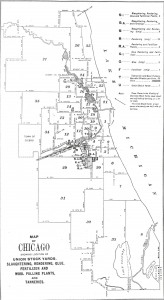 Initially the railroads financed and controlled the operation—hence the Transit name. The railroads never were able to agree to consolidate passenger rail terminals, but the stockyards served as sort of a giant Union Station or O’Hare for the livestock, complete with waiting rooms and restaurants.

As outlined in History of the Yards, a portion of the animals would simply transfer railroads here. The majority of the animals were pigs, sheep and cattle. Goats and horses were also handled.

It took several years for any meatpackers to move to the area. The Stock Yard Company itself was never in the meatpacking business, but provided facilities for transshipment and sale of the animals. The meat packers congregated to the west of the yards. This half square mile to the west was known as Packingtown. It was connected to the yards by alleys for driving stock from the trains to the packing houses.

Chicago quickly became America’s number one livestock market and meat processor. Famously the packers used every part of the pig except the squeal. The large companies; Armour and Swift manufactured many products beyond meat, using bone, leather and fat. Related industries also sprang up such as wool processers, glue makers, tanneries, leather machine belt makers and tallow companies to lubricate the belts.

The companies also innovated with their main product. In the 1870’s Swift invented the first practical refrigerated railcar, allowing the shipping of fresh meat. By the late 1800s fresh and canned meats became the major products.