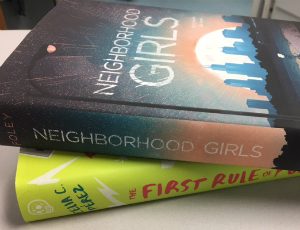 So many phenomenal teen novels have been published this year that my priority reading pile keeps growing. Some of the most exciting 2017 titles were penned by Chicago authors.

Jen Lancaster's sarcastic memoirs have kept me LOL-ing since Bitter is the New Black, but her first teen book, The Gatekeepers, tackles the serious issue of teen suicide on Chicago's North Shore. An unlikely group of friends bands together Breakfast Club-style to prevent their classmates from taking their lives. Lancaster lightens the heavy subject matter with hilarious 1980s movie references.

Set in Jefferson Park, Neighborhood Girls deals with another troubling current topic, police brutality. After Wendy's police officer dad get arrested for torturing suspects, she befriends some tough girls to protect her from unwanted attention at her Catholic school. Former CPS teacher Jessie Ann Foley's first novel, The Carnival at Bray, was a Printz Honor Book and a Morris Award finalist, so her new one is a must-read.

Another highly praised novel, Erika Sanchez's I Am Not Your Perfect Mexican Daughter, has already landed on the National Book Awards longlist for Young People's Literature. After her older sister's death, Julia plans to escape her rough Chicago neighborhood to attend college in New York. She thinks she'll never live up to her parents' expectations, but she soon discovers that her sister wasn't so perfect, either.

If you have middle schoolers in your life, they'll love The First Rule of Punk by Celia C. Perez, which is also generating huge awards buzz.