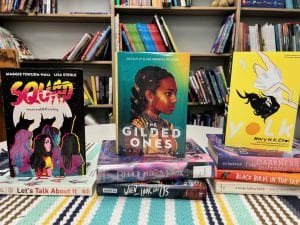 Every January, CPL's Teen Services librarians meet to pick their favorite books from the previous year in our Mock Printz, Morris, and Graphic Novel and Manga Awards discussions. Here are this year's winners.

This award is given to the best graphic novel or manga of the year, based on the Eisner Awards criteria.

The librarians chose Squad, a graphic novel about a clique of high school girl werewolves, as the winner.

Second place went to Let's Talk About It, a funny but informative nonfiction comic about sex education and relationships.

Third place went to Boys Run the Riot, a heartwarming manga about a trans boy named Ryo who starts a t-shirt company with his new friend Jin.

The Morris Award celebrates the best debut novel of the year.

This year the librarians chose The Gilded Ones, a fast-paced fantasy about female warriors who train to fight evil demons called deathshrieks, as the winner.

Second place went to Blood Like Magic, another page-turner that mixes fantasy and sci-fi elements in a story about Voya, who must save her family of witches from losing their powers.

Third place went to When You Look Like Us, a compelling mystery about Jay's search for his sister Nic, who goes missing after a drug deal gone wrong.

The Printz Award goes to the most literary book of the year written for teens.

Our librarians chose Yolk, a heartwrenching but sarcastic story of estranged sisters Jayne and June who mend their relationship after June is diagnosed with cancer, as this year's winner.

Second place went to The Darkness Outside Us, a captivating sci-fi tale of Ambrose and Kodiak, two young astronauts traveling on the spaceship Coordinated Endeavor on a mission to colonize a new planet after Earth is destroyed.

We had a tie for third place! Black Birds in the Sky tells the terrifying true story of the 1921 Tulsa Race Massacre, and A Snake Falls to Earth is about Lipan Apache teen Nina who needs the help of some kind animals from the Reflecting World to save her grandmother's Texas farm.

Which books do you think deserved the awards?