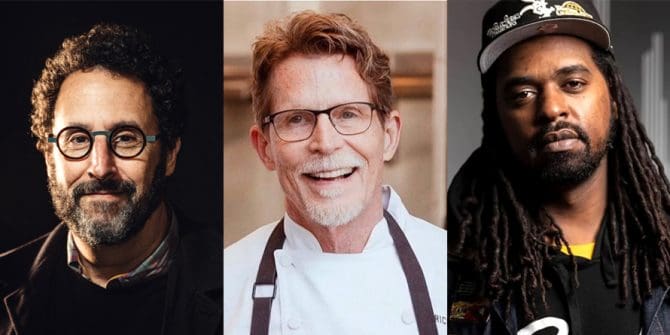 Recipients will be honored during the Library Foundation Awards in person on October 12 and online on October 19. Legendary newscaster Bill Kurtis will emcee, and the evening’s centerpiece will be a conversation between Sandburg Literary Award honoree Kushner and Scott Simon, host of NPR’s Weekend Edition Saturday.

Tony Kushner is perhaps best known for his two-part epic, Angels in America: A Gay Fantasia on National Themes and the musical Caroline, or Change. He also has numerous screenwriting credits to his name, including the world-renowned Steven Spielberg films Munich, Lincoln and West Side Story. Kushner is the recipient of a Pulitzer Prize for Drama, an Emmy award, two Tony awards, and an Olivier award, among others.

The Arts Award celebrates the power and impact of Chicago’s artistic community. Chef and author Rick Bayless has made exceptional contributions to the culinary arts, performing arts, and our city’s cultural landscape. In addition to his celebrated restaurants, including Frontera Grill and Topolobampo, he is the author of nine cookbooks  (Rick Bayless's Mexican Kitchen, Fiesta at Rick's) and a dedicated philanthropist who supports small farms, scholarships for Chicago Public School students studying the culinary arts and Chicago theater companies.

The 21st Century Award honors significant recent achievement in writing by a Chicago-based author. In presenting this award, the Library Foundation hopes to encourage the creation of new works and increase public awareness of the writer's talents. Through his dynamic use of social media, Shermann “Dilla” Thomas is changing the narrative about Chicago by highlighting its people, architecture, and impact on the world. His creativity makes Chicago's rich history accessible and engaging to a broad audience.

Currently, Dilla is a contributor to WBEZ as well as a freelance writer and content creator for the historic Chicago Defender and Block Club Chicago.