What if all of Chicago read the same book? Explore the theme "Beyond Borders" with us: Read Exit West, attend online events and more.
OBOC Home OBOC Home
Dec 2020 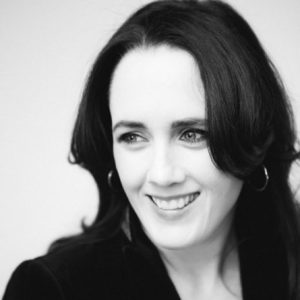 Jessie Ann Foley is the Printz honor-winning author of You Know I'm No Good, Sorry for your Loss, Neighborhood Girls and The Carnival at Bray. Jessie lives with her husband and three daughters in Chicago, where she was born and raised.

A couple years ago, after scoring a reservation at one of Chicago’s hippest new restaurants, I texted my mom: “having dinner in your old stomping grounds!”

She called me immediately. “Are you going to Gurney’s?” she asked.

“Yes, I know that,” she said impatiently. “I read about it in Chicago Magazine. You’re talking about Gurney’s. When I was a kid I used to do Mary Gurney’s grocery shopping for her. She was a one-legged bookie who lived on the second floor above the tavern, so it was hard for her to get around.”

“But it’s not a tavern anymore,” I explained. “It’s a Michelin-starred restaurant.”

She considered this. “Well, that’s good. I always wondered what would become of that place after Mary’s son got murdered behind the counter. Who would have ever guessed that Gurney’s would end up with a Michelin star?”

Sometime around the turn of the 20th century, my eight great-grandparents left the western coast of Ireland, one by one, to converge on the southwestern coast of Lake Michigan. They settled in neighborhoods that we now call Albany Park and Avondale but which, back then, were nameless. They married and found work: firemen, school clerks, coffin salesmen. One became the police officer who shot John Dillinger. Most had children, who quickly traded in the Gaelic lilt of their parents for a nasal bouquet of elongated a’s and dropped g’s and, in doing so, became not just Americans, but Chicagoans.

Whether out of necessity or love, they stayed put for three more generations. Which is how I ended up, one hundred years later, being affectionately ridiculed for wanting to eat award-winning shared plates (which, by the way, were astonishingly delicious) at the same place where my grandpa used to drink 60-cent pints of Old Style.

Sometimes when I consider the fact that I have never lived, for any significant period of time, anywhere but the city of Chicago, I feel proud. This city beats inside of me like blood. It is written in my DNA; how could I live anywhere but here? Other times, though, I feel a little bit embarrassed. Is it really my love for this town, my fierce if unreturned sense of loyalty, that has kept me here all my life? Or is it simply a lack of pluck, the kind of pluck my husband possesses, who himself came to this city in his 20s, leaving his family farm at the base of a great green hill in County Kerry, Ireland, and in the process making our three children both first- and fourth-generation Northwestsiders?

What would it be like, I sometimes wonder, to live in a place where you are a stranger?

While it’s true I’ve never had to spend Thanksgiving stuck at an airport, or had to troll Craigslist for help moving my furniture, I sometimes crave the delicious anonymity of living in a city where the whisper of memory doesn’t trail me everywhere; where I don’t care about changing neighborhood names or bandwagon sports fans or someone using the word “soda” with a straight face; where I can even go to the grocery store without running into at least three people I know.

But then, maybe these are the kinds of thoughts that everyone has, transplant or not. Like a Chicago parking spot carved out of a blizzard and marked off with lawn chairs and overturned paint buckets, we all want the thing that we can’t have. The transient crave roots, and the rooted crave moment. We are all hemmed in by the limitations of our humanness, each of us with our small and precious allotment of one single life.