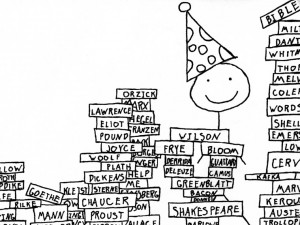 Okay, so literary criticism is boring. If you're not into classic, historic or highfalutin literature, you really don't care what makes something classic, historic or highfalutin. But give it a chance . . . When you find a critic who can actually write, you stumble across a whole new landscape of writers and their words. It's worth the extra effort.

One massive classic of the field is Patriotic Gore. Written by the eminent Edmund Wilson, it covers a ton of the literature written in the Civil War period. It turns out that people in the nineteenth century really knew how to write, and Wilson himself is skilled enough to make me want to read Uncle Tom's Cabin and President Grant's memoirs. As an added bonus, the author is an utter cynic when it comes to the reasons that people fight their wars, and his perspective sheds a whole new light on the War Between the States.

D.H. Lawrence's Studies in Classic American Literature isn't really a study. It's more of a rant about America and whatever dark gods Lawrence was obsessed with at the moment. Running the gamut from Benjamin Franklin to Herman Melville, the book is hilariously frank and forces you to think twice about books you thought you knew.

It's hard to find criticism written in the last few decades that makes for a pleasant read, but Cynthia Ozick proves to be a wonderful exception. The Din in the Head covers a wide range of authors, including Helen Keller, Tolstoy, Sylvia Plath and Henry James. She manages to be thoughtful without getting bogged down in endless meditation, which makes her book a joy to read.

See? That wasn't so hard. With books like these, you'll be a literary snob in no time.