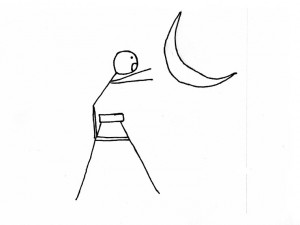 Sometimes, when you look up at the sky, mostly at night, or maybe during the day, there's this big glowing ball that doesn't blind you when you look at it like the sun does. It's got some dark spots on it, and it's kinda creepy and cool. I've heard that some people even went there, and now I want to know more.

It's easy to take advantage of people's fascination with the moon, and in the rough and tumble world of 1830s New York newspapers, someone did just that. The Sun and the Moon tells how an ambitious editor for The Sun concocted a story claiming that a famous astronomer had discovered life on the moon, including a civilization populated by man-bats. The hoax didn't last long, but it did sell a lot of papers.

But the truth is even more incredible. For All Mankind compiles some of the best footage from the Apollo missions and blends it all together, backing it up with top-notch Brian Eno ambient music. The wonder of space travel was never so visceral.

Then there are all those people who say it never happened in the first place. How to Fake A Moon Landing uses clever illustrations to take apart all those arguments about invented moon landings, climate change and various scientific issues people love yelling at each other about.

For my part, though, I'd never doubt the moon landing. Not only is there too much evidence in its favor, but if I ever confronted an astronaut about it, I might just get punched in the face.