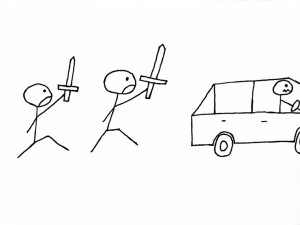 Did you ever want to pretend you existed in a different time and place? Honestly, I haven't, which is why I'm interested in reading about people who are. There are a great many people out there who love putting on costumes and living anywhere else but here and now.

By contrast, War Games: Inside the World of 20th-Century War Reenactors is an earnest and well-researched attempt to understand the mindset of people who dress up like soldiers to play out scenarios from World War I, World War II, Korea and Vietnam. The female author enters a mostly male crowd and does an admirable job at writing an even-handed look at a unique pastime.

But when reality proves too boring or restrictive for you, there's always the fascinating world of live action role playing. Leaving Mundania takes a look at the world of larping, where people take a break from reality to dress up as warriors, vampires, elves, cowboys and any number of things so they can play out their fantasies in elaborate real-world games that can sometimes take place over the course of years.

So if you were ever interested in being a monk, a soldier, a nurse, an ambulance driver or your standard mythical being, there are plenty of options out there.