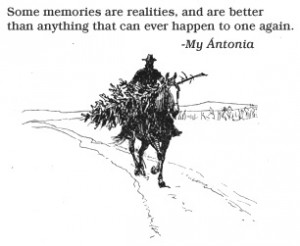 Willa Cather based the town of Black Hawk upon her hometown of Red Cloud, Neb. The town was founded in 1870 by Silas Garber, who three years later became governor of Nebraska. It took its name from Chief Red Cloud, a member of the Teton-Sioux Indians whose territory was to the north of the city around the Platte River basin.

What kind of town was Red Cloud in the 1880s? By all accounts, it was a bustling city, possessing a population of around 2,500—respectable enough for 1880s Nebraska. Eight passenger trains passed through the city on a daily basis, heading to Chicago, Kansas City and Denver. The town constructed a brick opera house in 1885, a source of civic pride. In addition, Red Cloud boasted numerous stores, as well as a standard complement of hotels, smithies, a mill, newspapers and banks. In 1884, when the Cathers first moved to Red Cloud, Webster Street’s false-front wooden structures, common to main streets on the frontier, were giving way to more permanent brick structures.

During Cather’s childhood in Red Cloud, Bohemians were leaving their country for several reasons. Serfdom was abolished in Bohemia, giving the peasantry freedom to move. Industrialization, and more specifically factory production of textiles, disrupted many traditional forms of livelihood such as the cottage weaving industries upon which many Czechs, like Mr. Shimerda, had relied. In addition, Bohemians made a practice of primogeniture (giving all land to the eldest son), leaving younger children with no choice but to make their own way in the world.

These immigrants were attracted to Nebraska because of the Homestead Act and the construction of a transcontinental railroad. The Homestead Act of 1862 gave settlers, including former slaves, single women and recent immigrants, the opportunity to buy 160 acres of land. In order to take legal possession, the homesteader only had to pay an $18 fee and live on the land and make improvements to it for five years. Over the entire 124-year history of the Homestead Act, more than 2 million people filed claims for land—approximately 40 percent were successful.

At the same time, as an incentive to construct the railroads, the federal government had given certain railroad companies huge amounts of land. The government intended that the sale of this land should be a substitute income for the railroad companies until the resident population had grown enough to support such a large transportation system. The companies advertised the sale of the land in many foreign countries. Their efforts to lure immigrants may have given some unrealistic expectations. “The New Song About America,” published in Czech in 1856, described America as a land where “dumplings grow on trees, with ponds of butter under these trees… pigs grow already roasted… fences are made of sausages.”

Not only were there no dumplings growing on the trees in Nebraska, there were almost no trees at all, and what few trees there had been the railroad companies chopped down in order to make rail ties. Former governor of Nebraska Territory J. Sterling Morton initiated a tree-planting campaign to encourage Nebraskans help the soil conserve moisture, and he is responsible for the existence of Arbor Day as a holiday. Closer to home, one of his sons established the Morton Arboretum, just outside Chicago. 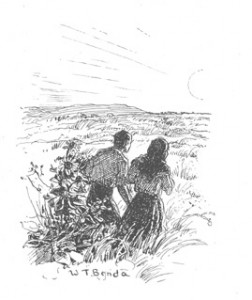 Once they had arrived, immigrants to Nebraska faced many hardships. Outside of Red Cloud, farmhouses were often built out of sod. These primitive structures were meant as temporary dwellings until farmers had attained enough prosperity to build wooden houses. Many immigrants, like those in My Ántonia, lived in dugouts, very basic forms of shelter that settlers had literally “dug out” of the earth. Both sod houses and dugouts tended to collect vermin and snakes. Although these structures were cool in the summer and warm in the winter, pioneers battled the elements in an unforgiving environment. During the late 19th century, settlers in Nebraska had to contend with a series of unusually cold winters, vicious blizzards, drought, prairie fires and devastating hordes of grasshoppers that stripped crops in a matter of hours. Conditions in the late 19th century were so grueling in Nebraska that most settlers eventually had to give up their farming efforts and seek work in towns.

Further, immigrants could expect a somewhat mixed reception from white Americans of older European stock. Relations between the new arrivals and settled immigrants were characterized by mistrust and self-segregation, rather than overt forms of hostility. However, there were many instances in which old and new immigrants helped one another selflessly, especially on the frontier, where help from a neighbor could sometimes make the difference between life and death.