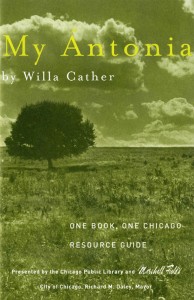 The Chicago Public Library’s One Book program for My Ántonia offered book discussions and a variety of other activities including an exhibit of photographs by Lucia Woods. These images featured prairie scenes of Nebraska as described by Ms. Cather in My Ántonia.

In addition, DePaul University launched its partnership with the One Book, One Chicago program by offering a 10-week, graduate-level class, Chicago’s One Book: Issues and Perspectives, which has been offered for each subsequent One Book selection. Programs also included a discussion at the Museum of Contemporary Art, film screenings of the film version and the CSPAN’s American Writers episode on Willa Cather, and a reading from the book with Steppenwolf Theatre Ensemble members Joan Allen and Martha Lavey.