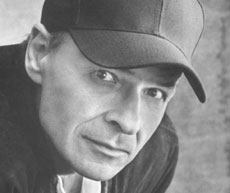 “Storytelling is the essential human activity. The harder the situation, the more essential it is. In Vietnam men were constantly telling one another stories about the war. Our unit lost a lot of guys around My Lai, but the stories they told stay around after them. I would be mad not to tell the stories I know.”—Tim O’Brien

Tim O’Brien is the author of Going After Cacciato, which received the National Book Award in fiction, and The Things They Carried, which received France’s prestigious Prix du Meilleur Livre Etranger and was also a finalist for both the Pulitzer Prize and the National Book Critics Circle Award. In the Lake of the Woods, a work of fiction published in 1994, received the James Fenimore Cooper Prize from the Society of American Historians and was named best novel of the year by Time magazine.

O’Brien’s other books are If I Die in a Combat Zone, Northern Lights, The Nuclear Age, Tomcat in Love and July, July. His short fiction has appeared in numerous literary and popular magazines, including The New Yorker, Esquire, Harper’s, The Atlantic, Playboy and Ploughshares, and in several editions of The Best American Short Stories and The O. Henry Prize Stories. In 1987, O’Brien received the National Magazine Award for his short story, “The Things They Carried,” and in 1999 the same story was selected for inclusion in The Best American Short Stories of the Century edited by John Updike. The Things They Carried, published in 1990, is a collection of interrelated stories about the men of Alpha Company, an infantry platoon in Vietnam. The title page of The Things They Carried says the book is “A Work of Fiction.” It is narrated by a character named Tim O’Brien, who the author says is not himself despite many similarities. The blurring of fact and fiction in storytelling is one of the most intriguing aspects of his writing.

The book explores the process of storytelling and why “story truth is truer sometimes than happening-truth.” In an interview with Publishers Weekly, O’Brien said that “If there is a theme to the whole book it has to do with the fact that stories can save our lives.” In “How to Tell a True War Story,” O’Brien wrote, “A true war story is never moral. It does not instruct, nor encourage virtue, nor suggest models of proper human behavior, nor restrain men from doing the things men have always done. If a story seems moral, do not believe it. If at the end of a war story you feel uplifted, or if you feel that some small bit of rectitude has been salvaged from the larger waste, then you have been made the victim of a very old and terrible lie. There is no rectitude whatsoever. There is no virtue. As a first rule of thumb, therefore, you can tell a true war story by its absolute and uncompromising allegiance to obscenity and evil.”

“My life is storytelling,” O’Brien said in an interview in 1990. “I believe in stories, in their incredible power to keep people alive, to keep the living alive, and the dead. And if I have started now to play with the stories, inside the stories themselves, well, that’s what people do all the time. Storytelling is the essential human activity. The harder the situation, the more essential it is. In Vietnam men were constantly telling one another stories about the war. Our unit lost a lot of guys around My Lai, but the stories they told stay around after them. I would be mad not to tell the stories I know.”

O’Brien is the recipient of literary awards from the American Academy of Arts and Letters, the Guggenheim Foundation and the National Endowment for the Arts. He has been elected to both the Society of American Historians and the American Academy of Arts and Sciences. Mr. O’Brien currently holds the Roy F. and Joann Cole Mitte Chair in Creative Writing at Southwest Texas State University. His most recent novel is July, July, published in 2002 by Houghton Mifflin.