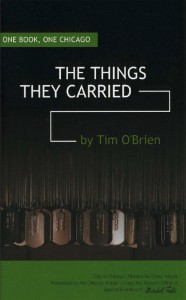 Tim O’Brien’s personal account of the Vietnam War is told in The Things They Carried. He recreates the soldier’s wartime experience through vivid description of items placed around their necks, held in hands, kept in knapsacks, placed in pockets and stored in memory. At times heart-wrenching, but always poignant, Mr. O’Brien’s novel tells the story of a generation of soldiers fighting a war that continues to resonate in American culture. The New York Times considered the book one of the best 10 published in 1990; it was also a finalist for the Pulitzer Prize the same year.

The Chicago Public Library selected The Things They Carried for its Fall 2003 citywide reading program to great success. Mr. O’Brien spoke to a capacity crowd at the Harold Washington Library Center and signed copies of his book. In addition, the Library worked with Facing History and Ourselves to bring together a class of students from ACT Charter School in Chicago and Deerfield High School in the suburbs. These students met with Tim O’Brien and each other to discuss the book from different perspectives. CPL also sponsored discussions and film screenings, and collaborated with the Old Town School of Folk Music, the Museum of Contemporary Art, Stories on Stage, Steppenwolf Theatre and DePaul University.