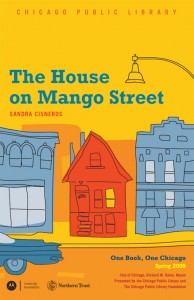 Sandra Cisneros’ seminal novel of a young girl growing up in a Chicago Latino neighborhood was first published in 1984. Cisneros depicted a world unique in its vibrancy, detail and people. The novel quickly became required reading in high schools, universities and book groups across the country, and was lauded as a groundbreaking work for and about young women.

Upon the 25th anniversary publication of the book, the Chicago Public Library chose The House on Mango Street as its 16th One Book, One Chicago selection. Sandra Cisneros participated in a talk and book signing for capacity crowds, and met with student groups and led workshops at our partner organization, the National Museum of Mexican Art. Steppenwolf Theatre commissioned an adaptation from respected Chicago playwright Tanya Saracho for production the following fall; in the spring we hosted a reading of the play in progress and a talk-back with the cast and playwright. Further programming included writing workshops; poetry readings with community organizations Proyecto Latina and Palabra Pura; a lecture on Mexican Chicago; and “town hall” community forums on immigration issues.