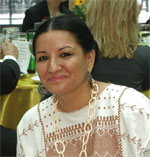 Q: It’s been 25 years since The House on Mango Street was first published. What about your work or about your writing style has changed over the years? What has remained the same?

A: I think my work still has a distinctive voice that is uniquely mine—and that voice is one of a person speaking Spanish in English. By that I mean that I write with the syntax and sensibility of Spanish, even when there isn’t a syllable of Spanish present. It’s engrained in the way I look at the world, and the way I construct sentences and stories. I was not aware of this when I wrote House, but I’m conscious of it now. What remains the same? Well, I am still as astonished by the world and as intuitive/foolish as ever, but I am aware that this is a good thing, and not ashamed of it as I was when I was young. The difference now is that I know myself. I think my writing is wiser, and, I hope, more complex.

Q: How much does childhood still influence your writing? How much has your family influenced you?

A: I believe the farther away we are from a story the clearer we can see it. So the older I am, the clearer I can see the stories of my youth. I am constantly influenced by what is spoken and told to me. It doesn’t always come from family. Most times, family are the least reluctant to tell me anything, and that’s why I have to invent so much when it comes to my family’s stories. I have very sketchy information there. Perhaps because we lived alongside each other, and I’ve found the closer you live to someone, the more distance you have to create to have privacy. But maybe it’s just my family that doesn’t talk about their inner life to me. Especially after I became a writer.

Q: The House on Mango Street so wonderfully portrays a young girl, Esperanza, discovering her identity. Do you think that such self-discovery is harder for a young Latina girl? Would Esperanza’s story be different if she were growing up today?

A: I think it’s hard for any woman in the world, regardless of her color, because the world is so patriarchal, especially now with the Christian Taliban taking over women and their lives on one extreme, and the media taking over women on the other polar opposite. It’s hard for women to know what they want when they’ve never been asked, but controlled by Church, State and consumerism. Add to that women are colonized and don’t know their history, but in a sense, all women are colonized, don’t you think?

It’s hard for women to gain access to who they are when they aren’t even allowed information about their own bodies, control of their fertility, church and state dictating choices that should belong to women themselves. I had to scavenge to find out about myself as a woman, and as a Latina. In many ways it’s simpler because of access to the web. In some ways it’s harder, because women aren’t even aware they are not in control of their lives.

At least when I was a young woman there was a feminist movement. Nowadays so many women don’t even know what feminism is, and equate “Girls Gone Wild” to liberation. Sad. On the other hand, I meet a lot of intelligent young women, and that’s encouraging. A lot of politically aware, intellectually curious, independent-minded women, who don’t buy the Paris Hilton model. So, I guess there’s hope.

Q: What is it like knowing that this book is taught so widely in American schools today?

A: I don’t take it personally. It has nothing to do with me, or with my book. The book is being taught because it is telling a story that has spiritual resonance at this time in history. It is serving a need, it is doing its healing, it is transmitting light, but I was just the conduit for that light, not the source. I am grateful that the timing was right for my labor to be recognized, and that the readers were ready to hear this story at this time. I am fortunate and blessed to be the flute, but I recognize and acknowledge I am not the music.