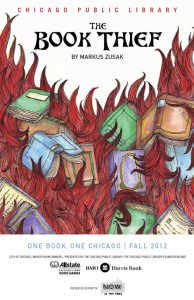 Markus Zusak’s novel The Book Thief, about a foster girl living in lower-class Germany during World War II, has been critically and popularly acclaimed since its publication in 2006. The novel had been on the New York Times bestseller list for more than 250 weeks by the time Zusak joined us for a series of programming in October 2012.

Not only did we have the honor of hosting Zusak in various events—including an interview with Chicago Tribune columnist and author Dawn Turner Trice—but we offered further programming on themes of war and justice. Most notably, Paul Rusesabagina, whose story was told in the film Hotel Rwanda, spoke about his own experiences. We also hosted book discussions in branches and at partner sites, accordion performances, drawing workshops for teens, read-outs of banned books and more. A stage adaptation of the book at Steppenwolf Theatre presented a wonderful opportunity to see this book brought to life.

The Fall 2012 One Book, One Chicago was presented by the City of Chicago, Chicago Public Library, the Chicago Public Library Foundation and sponsors Allstate and BMO Harris. Partners included DePaul University, Steppenwolf Theatre, Facing History and Ourselves, WBEZ 91.5, Now Is The Time and The Big Draw Chicago.