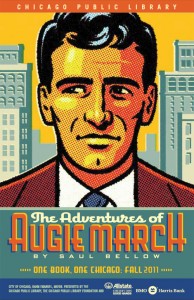 Our 10th anniversary selection challenged all Chicagoans to immerse themselves in the world of iconic Chicago character Augie March, and in the incomparable writing of Saul Bellow.

Programming took place over the course of two months, and in September and October 2011 we offered twice the programming around this selection. Martin Amis, Bellow’s friend and protégée, came to the Harold Washington Library Center to defend his claim that The Adventures of Augie March is the “Great American Novel.” Young adult novelists John Green and Benjamin Alire Sáenz discussed Bellow’s characters. Some of Chicago’s finest actors from a variety of theater companies, including Tony Award-winner Deanna Dunagan, read from the first chapter of the novel at Victory Gardens Theater. Two tours of “Augie’s Chicago” were offered by bus from Chicago Neighborhood Tours. Janis Freedman-Bellow joined editor Benjamin Taylor and scholar Jonathan Wilson to discuss Saul Bellow: Letters. Scholarly talks were offered at both DePaul University and the University of Chicago. Historian Dominic Pacyga offered a look back at Chicago during the Depression, when Augie March walked our streets. In partnership with DePaul University, the Chicago Public Library hosted a “flash fiction” contest judged by Stuart Dybek, and Dybek was joined at a reading by writers Achy Obejas, Jaswinder Bolina and Natalie Moore as well as the three finalists from the contest.

The Adventures of Augie March was discussed not only in our library locations and in area bookstores and community centers, but on Twitter in a daily discussion led by a team of librarians. Programming also focused on the anniversary of One Book, One Chicago, including a reading series of past selections at the Chicago Cultural Center, a poster design contest, a bookbinding contest and exhibit, and community discussions.