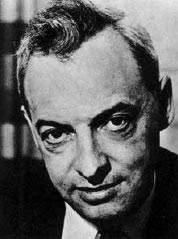 Saul Bellow was born in Lachine, Montreal, Canada in 1915, the fourth child of Russian émigrés. When Bellow was 9, the family relocated to Chicago and settled in a Humboldt Park tenement. While his father and siblings were less interested in studies than in business, Bellow attended school and spent his free hours in public libraries studying, reading books and trying his hand at writing fiction. He was fluent in English, French, Yiddish and Hebrew. Graduating from Tuley High School in 1933, he then enrolled at the University of Chicago to study literature. In 1935, Bellow transferred to Northwestern University, where he graduated with honors and earned bachelor’s degrees in anthropology and sociology. After a brief attempt at graduate school at the University of Wisconsin, Bellow ended his academic career and returned to Chicago to focus on writing fiction.

Bellow’s first novel, Dangling Man (1944), depicts a young man embittered and enlightened by World War II. His second and equally dark novel, The Victim (1947), explores the destructive nature of anti-Semitism. For this novel, Bellow was awarded the first of two Guggenheim Fellowships. (He would earn a second in 1955.) Six years later, Bellow published the semiautobiographical The Adventures of Augie March (1953). Aside from garnering Bellow a National Book Award, Augie March is notable both for its memorable opening paragraph and as a turning point in the author’s career. While the bleak topics of his first two novels are treated with marked gravity, Bellow applies to Augie March the spirited, comic narrative style with which he would be associated for years to come. His classic novella, Seize the Day (1956), portrays an absurd protagonist whose comic misadventures lead to epiphany in a Chicago subway. Henderson the Rain King (1959) is a huge, wildly comic romp and the novel that Bellow himself claimed to be his personal favorite.

In 1962, Bellow accepted a professorship at the Committee on Social Thought at the University of Chicago, a position he would hold for more than 30 years. During the 1960s and 1970s, Bellow’s narratives would take another notable turn. Herzog (1964), Mr. Sammler’s Planet (1970) and Humboldt’s Gift (1975) are marked by complex characters and themes of reflection, guilt and social dissatisfaction. In 1965, Bellow won the International Literary Prize for Herzog, becoming the first American to receive the honor.

Bellow would publish numerous additional novels, stories and collections before his death in 2005, including his final novel, Ravelstein (2000). Published when Bellow was 85 years old, Ravelstein is a fictional memoir based on longtime friend and colleague Alan Bloom and received widespread critical acclaim.

Bellow’s fiction has been featured in countless periodicals, including Harper’s Bazaar, The New Yorker and Esquire. His literary criticism has appeared in The New Republic and the New York Times Book Review, among others.

In his long and lauded career, Saul Bellow received many honors in the United States and abroad. He is the only author to have won the National Book Award three times. In 1968, he was given the Croix de Chevalier des Arts et Lettres by France. That same year, Bellow received the B’nai B’rith Jewish Heritage Award. In 1976, Bellow won the Pulitzer Prize for Humboldt’s Gift and the coveted Nobel Prize in Literature. In 1977, he was selected by the National Endowment for the Humanities for the Jefferson Lecture. In 1988, Congress awarded him the National Medal of Arts.

Bellow’s body of work, honors and critical acclaim tell the author’s place in the canon of American literature. Not only one of Chicago’s most remarkable literary icons, Saul Bellow is widely regarded among the greatest authors of the 20th century.