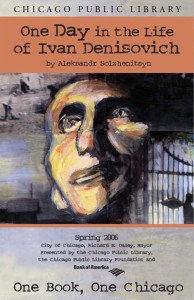 In One Day in the Life of Ivan Denisovich, Aleksandr Solzhenitsyn tells the story of a Soviet Union labor camp prisoner and his struggle to maintain a sense of individual humanity and personal dignity in an oppressive environment. This book was originally written for the Soviet journal Novy Mir and published in 1962. A number of translations in English have been published, however, the author prefers the English translation by H.T. Willetts.

In appreciation of Chicago’s selection of his book, Aleksandr Solzhenitsyn took a copy of the book from his personal collection, inscribed it and sent it to the Chicago Public Library. Chicago and its sister city of Moscow joined together for the first international One Book, Two Cities program, as students and other residents from each city read and discussed the book via email and teleconference. The Library hosted several events that bridged contemporary issues related to human dignity: James Fallows spoke about his experiences as a war journalist in Iraq, and Steppenwolf Theatre Ensemble member Yasen Peyankov presented a reading of passages in English and Russian. Panel discussions were held at the Harold Washington Library Center and DePaul University.