All CPL locations will be closed Monday, January 18. 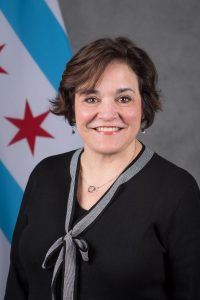 Telli began her service with Chicago Public Library over 30 years ago. In that time, she has served as a branch librarian, archivist and assistant commissioner.

During her tenure as commissioner, CPL redoubled efforts to remove barriers of access for Chicagoans. Telli oversaw the elimination of overdue fines, Sunday hours expansion and numerous capital projects dedicated to ensuring neighborhoods throughout the city had access to a state-of-the-art, safe place to read, learn and discover.

"Thanks to Andrea, Chicago's libraries will continue to have a central and trusted role within our communities, as we begin a national search for her successor," said Mayor Lightfoot. "I want to extend my warm congratulations to Andrea for her well-earned retirement and wish her and her family nothing but the best as they begin this exciting, new chapter of their lives."

At CPL, we'll miss Commissioner Telli’s warm greetings, sense of humor and sharp dedication to the system she helped to build and lead for more than three decades. Congratulations on your retirement!