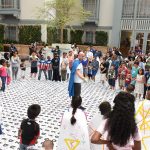 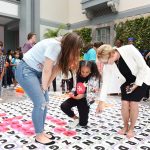 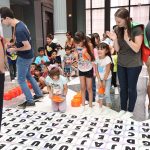 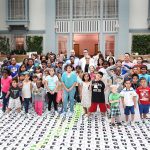 GIANT Word Winder, a game invented by Jumble author David L. Hoyt, is an educational spelling game played on the floor. Players spell out a winding path of words that stretches across the length of the board. The world record spanned 1,670 square feet comprising 20 9x9ft GIANT World Winder game boards.

David L. Hoyt, “The Man Who Puzzles America,” is best known as the author of the popular Jumble puzzle featured in more than 600 newspapers. Given his passion for education and the importance of play, Hoyt and his wife, Claire Haasl, began the David L. Hoyt Education Foundation in 2015. The GIANT Word Winder is part of an initiative to encourage play-based learning. In addition to developing literacy skills, children engaged in playing GIANT Word Winder hone critical thinking, decision making, teamwork and leadership skills.

Select Chicago Public Library branches have a GIANT Word Winder game board in their circulations. The 20 GIANT game boards used for the world record event were donated to CPL to provide to branches as well.

"Providing opportunities for children and their caregivers to engage in play that advances learning is part of our mission at Chicago Public Library,” said Commissioner Brian Bannon. “Setting the world record was incredibly fun for our patrons and further advances our core mission.”

The David L. Hoyt Education Foundation believes that words are powerful and play is vital, thus we strive to facilitate, enable, and develop inclusive, approachable, fun play-based learning opportunities for students of all ages. The Foundation provides programming locally to the Chicagoland area, but the games GIANT Word Winder and GIANT Math Winder are played in schools and libraries across the country. Games have also been placed and are being played in Tanzania, India, Brazil, and Canada. For the Foundation’s work providing programming for the Summer Learning Challenge, the Chicago Public Library has awarded the David L. Hoyt Education Foundation with the Golden Owl Award for Partnerships; GIANT Word Winder has won a Modern Library Award - Honorable Mention Award in 2016 and 2017. Additional information about the David L. Hoyt Education Foundation can be found at davidlhoytfoundation.org, or by calling 773-698-8483. For more information about Giant Word Winder, please visit giantwordwinder.com or Facebook.com/giantwordwinder.

Since 1873, Chicago Public Library (CPL) has encouraged lifelong learning by welcoming all people and offering equal access to information, entertainment and knowledge through innovative services and programs, as well as cutting-edge technology. Through its 80 locations, the Library provides free access to a rich collection of materials, both physical and digital, and presents the highest quality author discussions, exhibits and programs for children, teens and adults. CPL received the Social Innovator Award from Chicago Innovation Awards; won a National Medal for Library Services from the Institute for Museum and Library Services; was named the first ever winner of the National Summer Learning Association’s Founder’s Award in recognition of its Summer Learning Challenge; and was ranked number one in the U.S., and third in the world by an international study of major urban libraries conducted by the Heinrich Heine University Dusseldorf in Germany. For more information, please call (312) 747-4050 or visit chipublib.org. To follow CPL on social media, visit us on Twitter (@chipublib) or Facebook (Chicago Public Library).