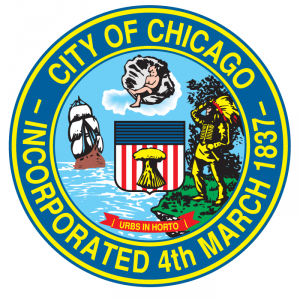 When Chicago was incorporated as a city in 1837, a committee composed of Mayor William B. Ogden and Aldermen Josiah Goodhue and Daniel Pearsons was appointed to draft a new seal. The seal is described in the ordinance as "a shield (American) with a sheaf of wheat on its center; a ship in full sail on the right; a sleeping infant on the top; an Indian with bow and arrow on the left; and with the motto ‘Urbs in Horto’ at the bottom of the shield, with the inscription ‘City of Chicago-Incorporated, 4th of March, 1837’ around the outside edge of said seal." Amendments to the ordinance were made in June 1854 and February 1893, the first amendment specifying that "over the shield an infant reposes on a sea-shell," while the latter amplifies this by decreeing a "sleeping infant on top, lying on its back on a shell."

No drawings or reproductions of the original versions of the seal survived, so a new and corrected design and description was provided for by ordinance of March 20, 1905. This is the present seal of the City of Chicago. The shield represents the national spirit of Chicago. The Indian represents the discoverer of the site of Chicago. The ship in full sail is emblematic of the approach of civilization and commerce. The sheaf of wheat is typical of activity and plenty. The infant in the shell is the ancient and classical symbolism of the pearl, and Chicago, situated at the neck of the lake signifies that it shall be "the gem of the lakes." The motto "Urbs in Horto" means "City in a Garden". "March 4, 1837" in the seal is the date of the incorporation of the city. 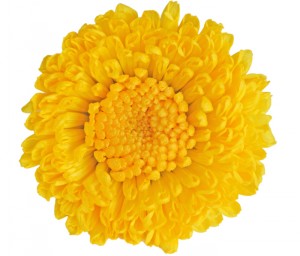 On June 17, 1966 the City Council adopted Mayor Richard J. Daley's resolution that the chrysanthemum be designated the official flower of the City of Chicago.  Mayor Daley proposed the resolution in response to a request by the Committee on Beautification of Chicago. 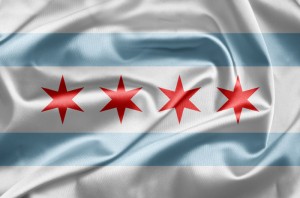 Wallace Rice, a lecturer on heraldry and flag design at the Art Institute of Chicago, designed the original two-star flag that was adopted in 1917. City Council added two more stars, on October 9, 1933 and December 21, 1939.

Starting from the flagpole, the four red stars in the middle white stripe represent:

The meaning of the points is unofficial, and explanations vary from source to source. The official design is given in the Municipal Code. 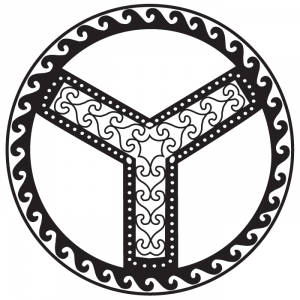 The Y symbol, also called the Municipal Device, represents the Chicago River and its two branches. The Y symbol is meant to be used unofficially by citizens, businesses and other organizations to promote pride in the city. Users are free to color and design it however they wish.

The most spectacular designs may be found in the Tiffany mosaics at the Chicago Cultural Center.