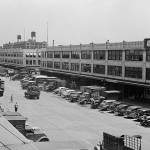 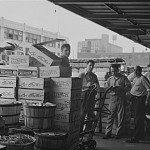 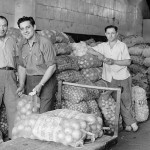 As noted in my last post, the old South Water Street Market was inefficient, lacked regulation and hindered plans to make the city's riverfront beautiful. Shortly after the Plan of Chicago was published, the Chicago Plan Commission waged a campaign in the courts and in the media to force merchants off the street. The commission issued publications like South Water Street Should Move and Reclaim South Water Street for All the People.

Economist Edwin Griswold Nourse and others envisioned a grand central terminal for rail and river access for the market's fruits and vegetables. But wide-open spaces were not easy to come by in 1925.

According to Frederick Rex in The South Water Street Market, they decided to move the market to "… the Valley District, then notorious as a center of criminal life and activity. Here were tumble-down houses which could be bought for a song, and the Loop was far enough away [that land] was comparatively cheap … and every railroad terminus in the city was within a mile and a half."

Compelled by the courts to vacate the riverfront so that the engineering marvel of Wacker Drive could be constructed, merchants banded together and built the new South Water Market. It provided facilities designed for food storage and distribution. The warehouse complex was built around 14th Street between Racine and Morgan on the Near West Side (now officially renamed South Water Market). This was just a few blocks from Maxwell Street Market.

The new market facilities were designed to host the produce market for years to come, with wider-than-usual streets and alleys. However, the market quickly became overcrowded. Traffic congestion and parking issues were noted as early as 1940 in a Traffic Survey in the South Water Market, Chicago. A 1962 report on Chicago's Wholesale Food Markets noted that the South Water Market was outmoded and suggested another relocation. The loading docks were built for horses, wagons and small vehicles, and the warehouse interiors required significant manual labor to unload and store goods.

It took several more decades for South Water Market to actually relocate. According to the 1989 report Chicago's Wholesale Food Distribution Markets, merchants using South Water felt that business had dropped because the market was insufficient for current use and would continue to drop unless the market was modernized.

In the 1920s, the market site was available because of its less-than-desirable location. By the 1990s, the site was highly desirable. It was only blocks away from the University of Illinois at Chicago's expansion and accompanying neighborhood revitalization.

In 2001, the 14th Street/South Water Market warehouses closed for good. The structures, which were noted as historical and architecturally significant, were remodeled into residences named the University Commons. The produce market moved again, losing its name in the process. These days, wholesalers go to the Chicago International Produce Market at Damen Avenue and the South Branch of the Chicago River.