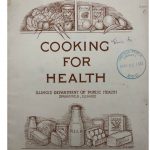 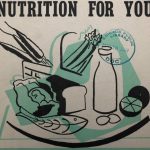 “Nutrition for You,” published by the Illinois Department of Public Health, circa 1940sSource: Government Publications, Chicago Public Library 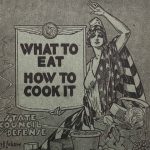 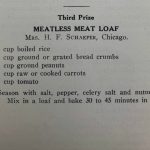 One of the missions of the Illinois Department of Public Health is to educate people about health issues, including nutrition. For over a hundred years, the department has published booklets and pamphlets about what to eat, what not to eat and how to plan meals on a budget. Many include recipes. It's fun to look back at these publications and see what the state advised during different time periods, and how it compares to advice given today.

Cooking for Health, from about 1941, has practical advice about meal planning and includes recipes for dairy, vegetable, meat or other protein, cereal and fruit dishes. Some of the more unusual recipes are braised brain, liver chop suey and prune bread. How about a cocktail made of 2/3 cup milk, 1/3 cup tomato juice and a speck of salt? Or, try a golden sandwich: half a marshmallow placed between two dried apricot halves.

Nutrition for You, from the late 1940s, has 18 lessons on the purpose of food (fuel, building and upkeep, regulating body processes), the function of proteins, vitamins and minerals, making healthy choices and stretching your food dollars. The advice in this booklet is similar to advice given today: "Some of us depend too much on macaroni, spaghetti, white rice, grits and corn meal. They are poor in minerals and vitamins. We might cut down on these foods and use more whole wheat products, enriched grain products, oatmeal, soy bean products, and fresh fruits and vegetables." However, some things have changed. "Cash and carry" stores were recommended because their prices were usually better than those that had charge accounts for regular customers. The lesson "Does your boarding house diet need repairs?" also reminds us of a different era.

The Illinois Department of Public Health wasn't the only agency to publish food advice. During World War I, the Official Recipe Book by the Illinois State Council of Defense urged homemakers to do their part to win the war by leaving foods such as wheat, meat, fats, sugar and milk for the army and our allies. These items were seen to have the highest nutritional and densest caloric values that could be sent overseas economically. Cooks were encouraged to use the provided recipes to make do with other foods, and above all not to waste anything. The recipes from this time period were vaguer than today, often not specifying what oven temperature to use or what type of "fat" was recommended. The sections on meat and meat alternatives include recipes for possum, pigeon and whale. Readers were encouraged to "share your WHEAT with the Allies" and try corn, rye and oatmeal breads and cakes, or barley scones, rice and potatoes. Wheatless Mondays was another initiative to conserve wheat. Not that it was all deprivation: For dessert, how about some patriotic cookies?

The Camouflage Cook Book, also published during World War I by the Illinois State Council of Defense, offered recipes that had been entered in the Woman's Publicity Committee's Camouflage Meat Contest. Third prize went to Mrs. H.F. Schaefer of Chicago for her meatless meat loaf recipe.

Are you tempted to try any of these recipes? For more Illinois nutrition documents, visit Government Publications on the 5th floor of Harold Washington Library Center.