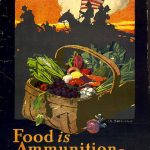 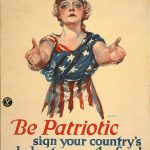 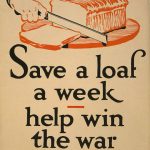 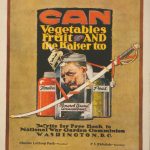 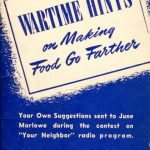 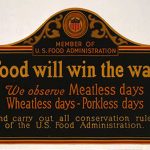 Before gluten-free and soy milk became common at the grocery store, Americans needed a bit of coaxing to embrace wheatless Mondays, meatless Tuesdays, porkless Saturdays and ice cream made without sugar or cream. Like our One Book, One Chicago selection, Barbara Kingsolver's Animal, Vegetable, Miracle, World War I or the "Great War" urgently required citizens to reconsider food.

A hundred years ago, on April 7, 1917, the United States officially joined the 32-nation conflict. This brought the total number of military personnel to around 70 million. Europe's farms, however, were already devastated from three years of fighting, and farm workers were deployed to combat zones. The management of food production and distribution was so critical that one propaganda poster equated it with "ammunition."

President Woodrow Wilson's new U.S. Food Administration was designed to ensure an adequate food supply for Allies on all fronts. To encourage participation, the agency sold American civilians on the value of their self-sacrifice. Posters emblazoned with messages like "Food Will Win the War" or "Be Patriotic, Sign Your Country's Pledge to Save the Food" soon blanketed storefront windows and public spaces.

In Chicago, retailers merged loyalty to country and customer. The department store Wieboldt's contributed a booklet with recipes such as "Leftover Meat Muffins" and "Defense Lunch-Box Sandwich Spread" to help citizens consume less sugar and meat. Pins and buttons were worn as signs of war effort pride.

Ensuring enough food for all was only one part of the war effort. To reduce the costs of transportation, Americans were also encouraged to grow and preserve their own food. Long before the "shop local" campaigns of today, the National War Garden Commission, with a little help from Uncle Sam, called for a victory garden on any available land. Urban centers like Chicago re-purposed backyards, schoolyards and vacant lots.

Learn more about World War I by visiting Special Collections at Harold Washington Library Center. The World War I Collection contains over 400 posters along with ephemera, photographs and pamphlets with subjects that range from military recruitment to buying bonds. For ease of browsing, many of our posters are duplicated in the Library of Congress online print collections.

Find upcoming commemorative events in Illinois along with other resources at the United States World War I Centennial Commission.