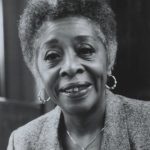 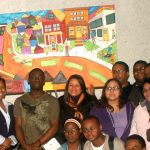 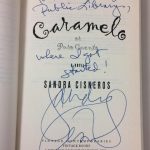 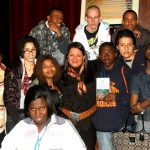 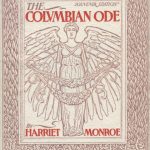 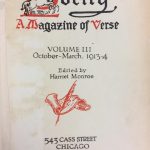 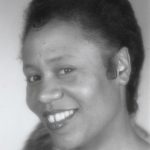 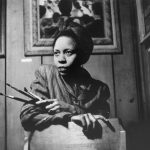 Have you walked by the Chicago Cultural Center and noticed a colorful mural by artist and MacArthur Fellow Kerry James Marshall? The large 132 foot by 100 foot mural can be viewed on the Garland Court facade, between Washington and Randolph streets.

Marshall describes the vision behind his mural, "My idea was to make of the trees a kind of Forest Rushmore acknowledging the contribution of 20 women who've worked to shape the cultural landscape of the city, past and present."

For Women's History Month let's take a closer look at five of the women highlighted in Kerry James Marshall's mural.

Brown was a social worker, businesswoman and theater producer who started Chicago's eta Creative Arts Foundation. The non profit organization was founded in 1971 to provide training and performance opportunities to youth and adults. It showcases works written and performed by black artists. Brown was named the "mother of Chicago's black arts community" by the Chicago Sun-Times. Brown has received many local awards and accolades, including having a section of South Chicago Avenue (between 75th and 76th Streets) renamed in her honor in 2011.

Author Sandra Cisneros was born in Chicago and grew up in a family where "library cards were mandatory." In 2009, her first novel The House on Mango Street was celebrated as CPL's One Book, One Chicago selection. The coming-of-age novel set in Humboldt Park served as the inspiration for YOUmedia's pilot project encouraging teens to explore and create digital projects based on the novel's themes. Cisneros' books have been translated into over a dozen languages and are required reading in classrooms across the nation. Her numerous awards include Chicago's Fifth Star Award and the National Medal of Arts.

Poet Harriet Monroe was born and raised in Chicago. She was launched onto an international stage with her Columbian Ode, commissioned as part of the festivities for the 1893 World’s Fair. However, she is best known for founding and serving as the long-time editor of Poetry magazine until her death in 1936. Monroe established an “Open Door” policy for the magazine, “May the great poet we are looking for never find it shut, or half-shut against his ample genius,” still used today, over one hundred years later. In those years, Monroe published early works of what’s become a who’s who of poetry list including Ezra Pound, T.S. Eliot, Robert Frost, Langston Hughes, Edna St. Vincent Millay, Gwendolyn Brooks (also featured on Marshall’s mural), William Butler Yeats, Sylvia Plath, E.E. Cummings and many others including Carl Sandburg and his poem “Chicago” which first described Chicago as the “City of the Big Shoulders.”

Taylor, born in Chicago's Cabrini Green, is a distinguished director, producer actress, educator, singer, playwright and founder of Black Ensemble Theater. She found the Black Ensemble Theater in 1976 with the mission of ending racism in local theater. The theater has a national reputation for outstanding original productions and exceptional education outreach programs. Seven and a half years ago, Taylor broke ground on the new 20-million-dollar Black Ensemble Theater Cultural Center (4450 N. Clark Street) which opened on November 18, 2011. She has written and produced more than 100 plays and musical biographies in addition to acting in several major films.

Dr. Margaret Taylor Goss Burroughs was an artist, poet, educator and co-founder of the DuSable Museum of African-American History. In 1939, Burroughs helped found the Southside Community Arts Center. The center served as a gallery and study for black artists and students. in 1961, Burroughs and her husband, Charles, found the Ebony Museum of Negro History and Art in the home at 3806 S. Michigan Avenue. The museum was later renamed the DuSable Museum of African American History and moved to its current location in the Washington Park neighborhood. She worked as an elementary teacher and then a high school teacher. Besides her career as an educator and an institution builder, Burroughs was an artist and prominent author of children's books and poetry.

Continue to celebrate Women's History Month by attending a library program at a branch near you, or by viewing an exhibit on women's history.