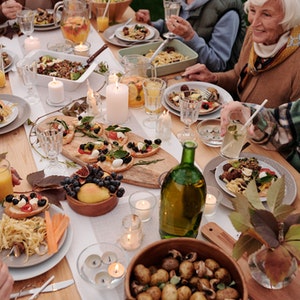 Rosh Hashanah and Yom Kippur and are the most important holidays in the Jewish tradition, often called the High Holy Days. They are celebrated in September or October of each year, based on the Jewish calendar. Rosh Hashanah is the Jewish New Year, which is a two-day celebration signified by renewed growth and the sowing of the harvest. This holiday is celebrated by a traditional Rosh Hashanah Seder. It is preceded by a month of self-examination, which culminates in Yom Kippur, or the Day of Atonement, on which another holiday Seder is held. Here are just a few books with traditional Jewish delicacies.

In Eat Something, Evan Bloom presents over 50 recipes from the Wise Sons deli. These include soups, salads, baked goods, and holiday recipes.

Feeding Women of the Bible, Feeding Ourselves is Alfond Kenden’s introduction to 20 heroines from the Hebrew bible. Each character is represented by 2 plant-based kosher recipes inspired by her experience.

Amanda Ruben presents a modern twist to kosher cuisine with her book, Feasting. A new generation is making its mark on traditional food with a new approach to classic recipes. Recipes include carrot salad with miso tahini, Middle Eastern salad with cashew cream, and pastrami.

Jake Cohen’s Jew-ish, offers recipes with a modern take on the classics as well as new ones.

The 100 Most Jewish Foods is Tablet’s compilation of 100 of the most popular and significant Jewish favorites.

Learn more about Jewish food and traditions from our Jewish American Heritage list.