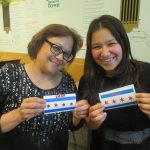 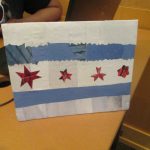 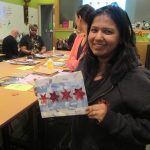 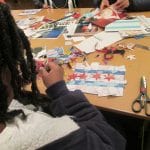 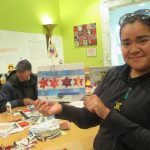 The Chicago flag is a familiar and well-loved design. I’ve been asked many times by visitors, inside and outside of the library, “What’s that flag? We’ve seen it everywhere.” Here at CPL, we’ve even seen it in the Maker Lab with our collage and vinyl classes.

As part of Chicago's birthday celebration on March 4, the City released the Chicago Design System. The system is guided by the flag, our history and the indomitable spirit of the city.

How to start using the design system? If you’ve taken even one Maker Lab class using Inkscape, or have access to Microsoft Word, you can get started now. Download Big Shoulders Display to your computer; the font repository dafont offers a helpful guide for different operating systems.

Learn more about the flag and design system with these quick reads.

"Chicago’s Flag Is a Much Bigger Deal Than Any Other City’s Flag" by Robert Loerzel
Chicago Magazine, August 2013
Robert Loerzel captures the many ways locals show off their admiration for the familiar design, and how it stacks up against other municipal flags.

"Good Flag, Bad Flag" edited by Ted Kaye
Ted Kaye provides clear examples and design principles you can apply to your own flag. Made available by the North American Vexillological Association, it’s available for download in eight languages.

"Exclusive: Chicago’s New Brand Identity Could Save the City $10 Million a Year by Mark Wilson
Fast Company, March 4, 2020
Mark Wilson describes the goals and aspirations behind the design system, including the public invitation to remix the available assets.