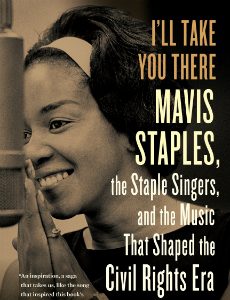 I'll Take You There, this year's One Book, One Chicago selection, is the untold story of living legend Mavis Staples—lead singer of the Staple Singers and a major figure in the music that shaped the civil rights era.

Honing her prodigious talent on the Southern gospel circuit of the 1950s, Mavis and the Staple Singers went on to sell more than 30 million records, with message-oriented soul music that became a soundtrack to the civil rights movement—inspiring Martin Luther King, Jr. himself.

Critically acclaimed biographer and Chicago Tribune music critic Greg Kot cuts to the heart of Mavis Staples’ music, revealing the intimate stories of her 60-year career. From her love affair with Bob Dylan, to her creative collaborations with Prince, to her recent revival alongside Wilco’s Jeff Tweedy, this definitive account shows Mavis as you’ve never seen her before. Written with the complete cooperation of Mavis and her family, this fascinating biography illuminates a legendary singer and group during a historic period of change in America.