What if all of Chicago read the same book? Explore the theme "Neighborhoods: Our City's Bedrock" with us: Read Bedrock Faith, attend online events, and more.
OBOC Home OBOC Home
Sep 2021 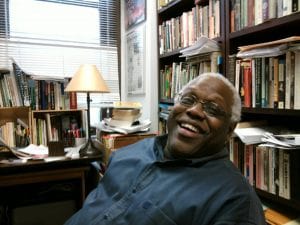 A Chicago native, Eric May graduated with a BA in Writing/English from Columbia College Chicago in 1975 and the following year joined what was then Columbia's Writing/English Department as a part-time instructor. He moved to Washington D.C. in 1985 to attend graduate school at American University and began working at the Washington Post as a newsroom clerk. In 1987, he joined the Post staff where he was a reporter on the Metro section. He returned to Columbia College in 1993.

His fiction and nonfiction have been published in such literary anthologies as Criminal Class Review, Briefly Knocked Unconscious By a Low-flying Duck, Fish Stories: Collective I, Sport Literate, Angels in My Oven, and f5 Magazine.

His debut novel, Bedrock Faith, is the 2021 One Book, One Chicago selection.