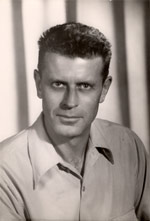 Walter Van Tilburg Clark was born August 3, 1909 in East Orland, Maine. His family soon moved to New York City where Clark’s father was head of the Economics Department of the City College of New York. When Clark was 8 years old, they moved to Reno, Nev., where his father was president of the University of Nevada from 1918 to 1938. His mother was a musician who graduated from Cornell and studied piano and composition at Columbia.

He married Barbara Frances Morse in 1933. They had two children, Robert Morse and Barbara Anne. He was teaching high school in Cazenovia, N.Y. when he began writing short stories that would bring him national recognition, including five O. Henry Prizes from 1941 to 1945. His stories focused on the West’s natural environment while exploring humanity’s relationship to nature and the forces that govern the natural world.

When Clark began writing The Ox-Bow Incident, he had certain purposes in mind. He was struggling with what he felt was his inability to write convincing dialogue with the voice and cadence of everyday speech. He also wanted to break out of the limitations imposed by the popular or formula western story. In his introduction to a 1962 edition, Clark said that his purpose was to “not only write as much as I could in dialogue, but to find my way into a typical western story situation, with all the typical western story people, and see if I couldn’t make the people come to life and the situation say something that could still be heard.”

When The Ox-Bow Incident was published in 1940, it received wide critical acclaim. The novel examines issues of justice, law and order, and the role of the bystander. In a 2001 Explicator review, Kenneth Hada wrote, “It is a novel with profound implications for people living together under law and in a free society.” He said that the work raises questions that are pertinent today, such as “Should aggression be opposed by force? How shall an individual stand against tyranny? When is an individual or society to involve himself or itself in another’s affairs? What exactly is the true nature of justice?”

Clark responded to critics who called it “a tough and complicated novel.” He said that it is “complicated in terms of the number and variety of human motives at work in it.” He went on to add: “Personal relationships and intentions seem to me what matter most. They are the real, and only real, foundations of all our institutions, including the legal and the political. When enough of them are good, the institutions will be good, and when too many of them are bad, which is to say selfish, the institutions, no matter what fine names we give them, will also be bad.”

The New Yorker’s Clifton Fadiman said The Ox-Bow Incident was his “unwavering choice for the year’s finest first novel. It has many of the elements of an old-fashioned horse opera—monosyllabic cowpunchers, cattle rustlers, a Mae West lady, barroom brawls, shootings, lynchings, a villainous Mexican. But it bears about the same relation to an ordinary western that The Maltese Falcon does to a hack detective story. Not to put too fine a point on it, I think it’s sort of what you might call a masterpiece.”

Clark’s second novel, The City of Trembling Leaves (1945), is a semi-autobiographical account of a sensitive boy growing up in Reno, Nev. His third novel, The Track of the Cat (1949), is about a Nevada cattle ranch threatened by a mountain lion. He also published a collection of his short stories, The Watchful Gods (1950), his final book. Although he continued to write and worked on other novels, he did not publish again.

He edited the journals of Nevada pioneer Alfred Doten, which were published posthumously in 1973.