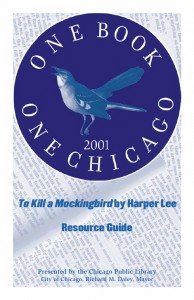 One Book, One Chicago’s inaugural book, To Kill A Mockingbird, was written by Harper Lee in 1957 and published by J.B. Lippincott in 1960. Through the eyes of a 6-year-old child, Scout, Lee addresses issues of civil rights and social injustice. Mockingbird was an immediate bestseller and won a Pulitzer Prize in 1961. Although it is the only novel Ms. Lee wrote, it continues to resonate as a representation of American culture, history and literature. It was awarded “Best Novel of the Century” by Library Journal in 1991.

During One Book, One Chicago’s first program in fall 2001, Mockingbird was borrowed by over 6,500 library patrons, including the circulation of 350 foreign language copies. Discussions were held in branch locations as well as many Starbucks stores. Lectures, film screenings and a mock trial with local attorneys and news personalities drew enthusiastic crowds. The selection of Mockingbird by the Chicago Public Library was the impetus for many cities to create “One Book, One City” programs. More than 60 cities have read To Kill a Mockingbird, and it remains the most popular title chosen for “One Book, One City” programs across the country. Harper Lee wrote the following to CPL upon our selection of the book:

When the people of Chicago assemble in various parts of the city to read and discuss To Kill a Mockingbird, there is no greater honor the novel could receive. People of all backgrounds and cultures coming together to put their critical skills to work—nothing could be more exciting! Or fruitful: when people speak their minds and bring to discussion their own varieties of experience, when they receive respect for their opinions and the good will of their fellows, things change. It is as if life itself takes on a new compelling clarity, and good things get done. Bueno suerte, everybody! Les amo! - Harper Lee

The inaugural One Book, One Chicago was presented by the City of Chicago and the Chicago Public Library.