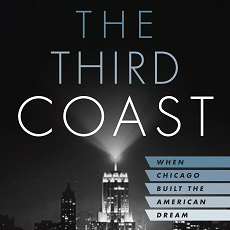 The Third Coast by Thomas Dyja was the 26th selection for One Book, One Chicago. The season’s program explored the book's central theme, Chicago: The City That Gives.

From October 2015 through May 2016, we explored the theme from multiple perspectives, as recounted through personal experience, imagined in literature, presented in politics, or synthesized in music and art.

The Third Coast presents a critically acclaimed history of Chicago at mid-century, featuring many of the incredible personalities that shaped American culture.

The 2015-16 One Book, One Chicago season featured a variety of events at Harold Washington Library Center, as well as at partner locations, and for the first time, at every single neighborhood branch location of Chicago Public Library.

Additionally, One Book, One Chicago funded a series of CPL Maker Lab programs on design and architecture, the “Really Tiny House” series.

In addition to events, the season featured the introduction of several innovative digital programs including: