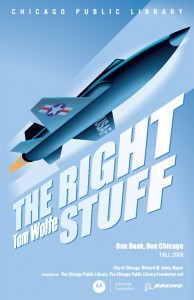 One of today’s most respected writers of both fiction and nonfiction, Tom Wolfe was a pioneer of the “new journalism” when he wrote The Right Stuff in 1979. In Wolfe’s distinct and energetic reportorial style, The Right Stuff shares the remarkable story of the seven astronauts chosen for Project Mercury, America’s first manned spaceflight project.

Programs included Mr. Wolfe in conversation with Chicago journalist Carol Marin; a screening of the famous film adaptation in Grant Park; a panel of journalists led by Alex Kotlowitz; and a panel discussion at the Museum of Science and Industry on the future of space exploration with NASA’s Roger Launius and others. By choosing The Right Stuff for One Book, One Chicago, the Chicago Public Library applauded Wolfe’s legacy as a writer and the importance of this book in the canon of nonfiction, and presented an opportunity for Chicago to reflect on the early days of space travel during NASA’s 50th anniversary year.