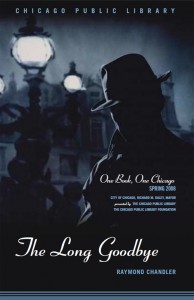 Raymond Chandler’s distinct style has influenced fiction, film and more, well beyond just the crime genre. He and his iconic detective, Philip Marlowe, are at their most memorable in The Long Goodbye, the 14th selection for One Book, One Chicago. Hardened loner Marlowe gets pulled into class wars and murder, and along the way we meet cunning blondes, dirty cops and the wonderfully sharp sentences of Raymond Chandler. Who else could write, “She gave me a smile I could feel in my hip pocket”?

To celebrate the world of Raymond Chandler, One Book, One Chicago hosted a slate of panel discussions, lectures, films and more. A reading from The Long Goodbye kicked things off at noir-inspired local bar Weegees; The Music Box movie theater held a Chandler film series throughout April; Chandler biographer Judith Freeman gave a talk and then joined Chandler enthusiasts Peter Sagal, Achy Obejas, Pico Iyer and others for a panel discussion of Chandler’s legacy; Chicago crime writers from The Outfit Collective got together to ruminate on their favorite part of the novel; and film scholar James Naremore talked about the influence of noir novelists in Hollywood.