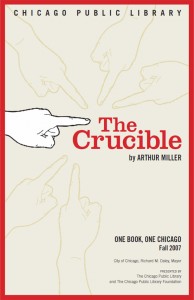 Arthur Miller found an apt metaphor for the McCarthy hearings of the 1950s in the 17th century Salem witch trials. The Crucible is one of Mr. Miller’s most produced plays, and in fall 2007 it was on the main stage at Steppenwolf Theatre. The Chicago Public Library partnered with this legendary Chicago theater on the 13th One Book, One Chicago selection, and created programming and discussions that focused on the lessons of Mr. Miller’s play, most importantly understanding others in our community and the pursuit of truth.

One Book, One Chicago welcomed New York Times columnist and former theater critic Frank Rich to our stage for a conversation with journalist John Callaway about The Crucible, McCarthyism and the current media’s role in politics. Further programs included a panel discussion on how truth is defined and controlled; a “Listening Room” event with Third Coast International Audio Festival and Steppenwolf Theatre featuring audio documentaries on what it means to be American; film screenings; staged readings from the play all over the city; and a number of community discussions in Chicago Public Library locations on the divisions in our communities and how they can be mended.